Considered by some experts to be one of the postmodern society’s main feature, relativism cannot be an inheritance to the future. 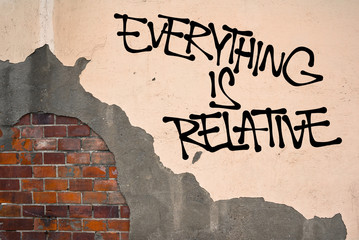 Relativism has been seen increasingly important in contemporary culture. The proponents of this theme have been used in different academic areas around the world. This framework emerged as a way to the non-absolute, nihilistic one, as well as it being an important base to postmodern ideologies. Nowadays, the current academic education seems to present problems concerning the notion of right and wrong, through the attempt to include diversity at the same time as it becomes an authoritarian and exclusive system.

The academic institutions realize important roles that are not just about the educational area; they have a crucial role in the formation of ideologies. These ideologies might have a completely influence a nation, as well as also modify standardized characteristics and generate new models and points of view.    Nonetheless, the search of knowledge was apparently forgotten by the humanities and social sciences.

Some of the postmodernist approaches brought by philosophers such as Foucault, Derrida, Lyotard, and Rorty are often controversial within political and educational speeches. From these ideologies, all truth is relative – there is no absolute truth – just as all cultures deserve to be respected. In addition, the values are totally subjective, tolerance is a value given as good and the domination is evil. However, the divergences of relativistic speech appear within their own statements; some post modernists dictate how things are, which brings us to an absolute truth.  They also claim that Western culture may be considered destructive and evil, similar to egocentric or selfish attitudes, as well as defend their policy aimed at the domain of the politically correct.

With regards to academia, these postmodern and relative points emerge all the time. Imagine a discussion between two students in a classroom, where one of them is losing the debate. As the student does not want to lose the discussion, he uses a relativistic argument to try to close it, he says that “all of this is just an opinion”. That is, one of them uses relativism as a rhetorical weapon to try to make it look like he did not lose the discussion. This can be scene in many academic institutions in the United States, Canada or in some countries in Europe.

Kate Ellis is a professor in Rutgers University and a radical feminist. Ellis, as she wrote in the Socialist Review, believes in ideias such as that capitalism and sexism go hand in hand and that to have equality between the sexes we need to overthrow society. Ellis finds – according to her article – that the students think like liberals. This means that her students bring to the classroom the whole liberal capitalist framework that Ellis thinks is wrong. So, Ellis wrote that she uses deconstruction as a weapon against those beliefs. If she first undermines her students belief in the superiority of capitalist values, then their core values will be destabilized. Using relativism as a rhetorical tool, she can persuade her audience without having to go overcome any arguments, or run the risk of failing to do so. Once their Enlightenment views are emptied by relativistic arguments, she is able to fill the void with her correct political principles. And she is not the only one, since this situation has been discussed in many universities in the world.

In Evergreen State University, United States, students locked professors within the university, where groups of undergraduates with baseball bats searching for individuals who refused to adhere to their demands, such as a prior compulsory invitation for white students and faculty to not enter the university for a week. The consequences of this ideology was also observed at Laurier University, Canada, where a teaching assistant showed a video, from a public Canadian TV program, where one participant criticized the postmodern beliefs. The teaching assistant was reprimand by her professor, a university administrator specialized in diversity, and another university official, for showing the video without condoning the individual who question or criticize their belief. These stories are repeated in many places, as a negative and exaggerated consequence of these types of ideologies within the academic area.

In Brazil, even if relativistic and postmodernist movements within the academy still do not have much force, they can cause problems as well as in countries where this is already happening, or even worse. Noam Chomsky – a strong critic against this movement – said that there are differences between these ideologies when they are propagated in First or Third World countries. According to him, in the First World countries these ideologies are not so important, “so much of nonsense goes on in the Paris cafes or Yale comparative literature department”. However, for Chomsky, “in the Third World, popular movements really need serious intellectuals to participate. And if they are all ranting postmodernist absurdities… well, they are gone.”

According to the marxian quote, “the philosophers have only interpreted the world, in various ways. The point, however, is to change it.” In fact, perhaps it is time to stop changing and start interpreting again.