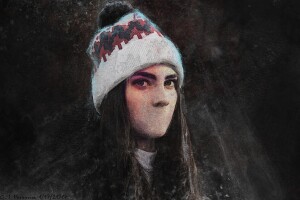 Being a woman has never been easy regardless of the year you were born, we still suffer today with the remains of a creation of a sexist world and we fight, for each other, trying to give voice to those who have not yet managed to break free. Imagine then being born a woman in an entire sexist family and being raised since when you were born with your voice suppressed? This is my story, my name is Meg and I was quiet and abused.

When I was little it seemed to be normal, I saw my aunts and my grandmother being silent, oppressed to not have a voice, even once. I saw my aunt separate from her husband who cheated on her by hearing the phrase “you didn’t treat him well, he was right in what he did”, I grew up with comments like these so close to me that I started to carry them as if they were my own thoughts, I was conditioned since I was a little girl to have sexist thoughts because I thought they were correct.

I remember a time when I was about eleven years old, I was playing with my older sister and we started laughing, and laughing out loud, until our father cursed us, because it was wrong for women to laugh out loud, these are the things that made me grow silent and with absurd concepts about what it is to be a woman and how a woman should be.

I had several little boyfriends in my childhood, but something very childish, nothing serious, just those dates of walking hand in hand and teasing each other, until at the age of sixteen I met a guy, and I fell in love with him, in a few days I already I had taken him to present to my family, he seemed to be a nice guy, he had been raised by women and he was very intelligent and despite my fear of my father I took him and it was quiet. Everything seemed beautiful as all teenage love is, until he forced me to lose my virginity to him, where as much as I said I didn’t want to and I wasn’t prepared, it didn’t help, I cried for days.

The days went by and he constantly forced me to have sex, but I didn’t speak anymore, I didn’t say I didn’t want to, because I was raised to obey. That year I repeated at school, my father was furious so I promised that next year I would study twice and dedicate myself more, here’s a spoiler, I couldn’t do it. The following year was horrible, like all the others next to him, in the first year we ended up ending a few times, but we ended up always coming back, and he always told me that he was too much for me and that no one would want me, besides me I always thought about what I often heard my father saying “a woman cannot have more than one man in her life”, how would I even consider taking someone else home but him? I was just a teenager with a lot of fears.

The years passed and the situations became more and more difficult, I ended up getting away from all friends at school, because I was forbidden to have male friends, I couldn’t go to a friend’s house without giving a thousand and one explanations, I couldn’t wear shorts or skirts, let alone speak loudly or swear words, everything I heard when I was a little girl, about the woman needing to accept the standards that the man demands silence was what I was going through, so I did , I accepted everything quietly. Until one day I cried and complained, I just wanted to talk and explain that I was not well with that situation, until I was slapped, and that was the beginning of everything, of all bites, jerks and slaps, all physical and psychological aggressions, that made me go to sleep crying for years. His explanations were that all this was for me to learn, the bite was for me to learn, the slaps were for me to learn, and the pushes too, but no physical injuries compared to what he did it with my head, always putting me down and making me feel like trash and the worst person on earth, besides always making it very clear that the injuries were my fault for not acting as he wanted. He made me kneel on stones and apologize, made me sleep on the floor of my own room, and he raped me several times, where even though I was crying in the act it didn’t stop him, and in the end I still heard “you are always without desire, what a drag, just like that”. I also remember always being sick, my immunity was always low, and besides, he wouldn’t let me eat, because I was too fat for him[1] .

When we went to college, he took one course and I took another, it was more of a terror, because everything became a reason for him to want to argue with me, so he switched to my course, and coincidentally started talking about feminism in practically every disciplines, a movement that I didn’t know, I started to see that everything I had already gone through was wrong, and when I started calling him abusive it ended up being worse, because he didn’t accept that term, so he took offense and ended up attacking me. I started to create friendships in college and in conversation circles, increasingly discovering new things and new thoughts, I was influencing myself, and I am grateful for these influences, because if they weren’t there, maybe today I wouldn’t even exist anymore and it would be just another number of femicide cases.

I remember one day watching television and watching a woman report, a lawyer who had been thrown from the fourth floor by her boyfriend, and all the comments I heard from my family were “she must have done something” or “what she didn’t do to deserve this”, and it hurt me a lot, so tired of just listening I finally spoke, but not about me, because until today I didn’t have the courage to tell them, but I said that nothing would justify such an act, it ended up generating a great discussion between everyone.

A few months later I couldn’t stand living in that bubble anymore, I felt I had two options, to die in his hand or to get out of it, and that’s what I did, I managed to get out of the relationship, alive, it was very difficult, it was 7 years of suffering abuses, it was years that made me go into a deep depression, thinking about giving up everything and trying to commit suicide, but I succeeded, I won.

Nowadays I leave home, but whenever I go and start talking about some controversial subject, I manifest myself, I speak, I explain, and how much they are changing makes me extremely happy. I am grateful for my friendships that supported me, my teachers who taught me and myself for choosing me.

I am really sorry you went through this

What a story… And your writing is wonderful! Congrats for your English and for your strength!

Thank you, and I take this opportunity to say that you are one of the professors who helped me a lot along this path.

Thank you so much for sharing, Ana Carolina. I remember you telling a little about your story in Multiletramentos. We are together in this fight <3